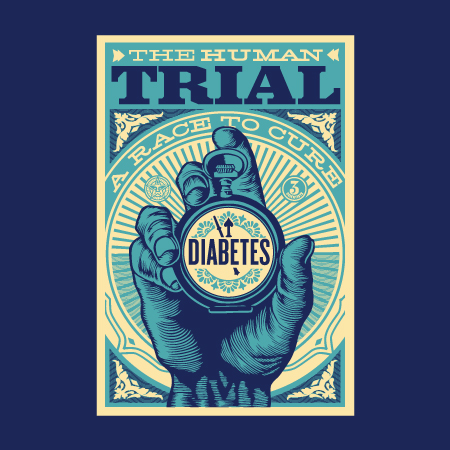 Someone recently asked me If I had seen The Human Trial, and if I had any thoughts about it?  I told them that I did see it and had no real earth-shattering thoughts to be discussed.  Truth be known, I saw it a few times and my thoughts have been constant and with a single-focus.  They have been on Maren and Greg, the two subjects highlighted in the film.

You see I have lived out this film a few times in my life.

Some things, perhaps, differed slightly but the story was the same.  In 2013 I wrote, Diabetes Jeopardy Answer #29 for D-Month: Without them, We Would have No Idea what Would Work to Help Those with Diabetes.  In that article almost ten years ago, I highlight the story of my late and dear friend Kenny, along with Gary, and Rita.  All had undergone islet cell transplants.  Going where no one had gone before.  There was no movie on their lives.  There was no tugging at your heart as you watched them undergo a scientific procedure that was unproven.  No sharing how they entered a dark black hole with absolutely no guarantees what would await them on the other side. No viewing audiences to cheer them on.  It was just them. Science. Unknowns. Dreams, and that was it.

As I watched The Human Trial, my heart went out to Maren and Greg.  They are 2022 heroes and both should be treated as nothing less.  To take one’s body as a whole, and say; “…..take it.  Use it. Learn from it.”  The entire movie was one I have seen before.  What Vertex (now the owners of Viacyte) is looking to achieve is what those who have gone before have worked toward, a means to have a person with diabetes off of insulin with insulin producing cells working full time, or for a length of time, where blood sugars are normal again.  Whether in a pouch, in a device, a new line of cells, a new derivative of stem cells, but some means of insulin being produced again.

All were with some sort of immunosuppression, most ended up back where they started.  Most involved where the project failed and they ended up back on insulin.  If you’re nodding your head as you are reading that the project failed, it’s here where I want; rather; where I need to stop you.  The projects have most certainly NOT FAILED.  As I watched the film and saw Maren and Greg with the frustration as if they somehow let us down.  The pain of why “did I bother doing all of this in the first place”?  Back they went, to the worlds they knew before undergoing such a trial.  As we watched, did we just think, “Wow, too bad for them?”

When it was decided we would go to the moon and back, it was understood that we were going where no one had gone before; failure was not an option.

What The Human Trial film’s writer, Ms. Lisa Hepner, did is she pulled the curtain away on the glamor perception of research and allowed us to see just two lives that have agreed to go where no one has gone before.  To be involved with research, the very word meaning, again, ‘re’—to search.  To search again and also,  as many times as it takes to get it right.   To jump off a cliff with no means of climbing back once the leap is made.  But fail?  Oh no dear friends, I can share with you from first-hand experience that this project was by no means a failure.   Well, it does not have to be.  But that is not on Maren or Greg; just like it was not on Gary, Rita, Kenny, and so many others back over ten years ago—you see, that’s all on us.

Here’s what I know.  Back over ten years ago, no one fully appreciated that we could actually take an insulin-producing cell that did not actually belong to them and implant it in their body, and it would work.  It would create insulin.  Too much screaming and fighting about being on immunosuppression drugs as if that made the accomplishment anything less than it was, a huge success.  If the Diabetes Research Institute along with others had not done that work well over ten years ago, I can assure you that the chances of Vertex doing what they are doing today would stand little chance of moving forward.

So please join me in asking, okay, what next?  How do we make it better?  How do we make it work better and longer?  We know it works, but it needs fixing, dare I say tweaking.  Give those who need it, the money to go to the next step.  Let’s not wait another ten years.  Let’s sink every cent we can in making this all work the way it should.  Why do we give a ticker-tape parade for walking on the moon but to Maren and Greg, who gave their entire self to journey into the darkest hole imaginable, jeopardizing family, work, and possibly even their own lives………….with barely saying thank you. And if the Motion Picture Academy of Arts and Sciences (their name alone says it all joining art and sciences) does not see Ms. Hepner’s Picture as the truest example of Documentary with a nomination, that will truly be their loss.

Kenny Bernstein is a man I can never talk about without tears coming to my eyes.  I remind you all that when I asked how it felt to be able to eat whatever he wanted without the fear of diabetes after his islet cell transplant, he gave me his huge smile and he said; “It feels great, Tom.  But I didn’t do this for me. I did it for your Kaitlyn.”

Indeed he did.  Now is the time to turn on everything we can to advance what Kenny and others did over ten years ago, and Maren and Greg did more recently.  It works. The rocket takes off.  Now we have to get it to the moon and back safely.  Do THAT for my Kaitlyn, my Rob, your loved ones, and the millions like them.

I am a DiabetesDad.

One thought on “The Human Trial, Heroes to this Day, How the Film Actually Ends is Up to Us”