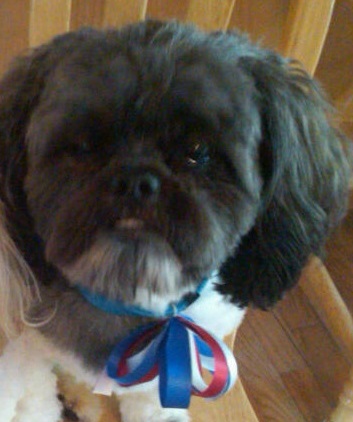 I was not going to have another dog.  It just was not in the cards.  When a new litter of Shih Tzus was born to a family member, we declined as we expected.  Weeks went by and all the dogs were spoken for, but one.  All the others that were claimed were brown, but his little fella looked like a black and white patchwork, more seen in a cow than a dog.  He was so tiny.  We were visiting and I was asked to hold this little, tiny, furry, slightly squeaking bark of a dog when I held his nose close to mine and said; gimme one reason to take you home.

Without hesitation, he lifted his head and licked my nose.  He’s coming home with us. …….and just like that Dusty became a member of the family.

We welcomed the little pup who grew quickly and he grew strong.  He was surely a small dog as Shih Tzus tend to be, but he had large shoulders and was a strong dog for his size.  Soon another litter was born and we took another puppy, Jessie.  The two became thick as thieves.

Inseparable these two became, as I playfully nicknamed them Stupid 1 and Stupid 2 because whatever trouble they did get into…..they got into together.  But they were great dogs.  People marveled how when told to go to their room, they marched right in.  Same as when we announced, Bedtime!  If told he was a bad dog, Dusty’s shoulders would drop and those big eyes looked up at you as he walked by knowing he did wrong.  They were also fabulous with both kids and seniors.

He was a loyal dog.  Once, a UPS man delivered a package to me while on our porch.  I turned to walk away and the UPS man took a step toward me while my back was to him because he wanted the spelling of my last name.  Dusty took a leap between us and leaned on his hind legs and growled his upper teeth.  Should I be afraid.  I answered that he had never done that and I would not take the chance…..and the man left.  Dusty jumped up on my lap and looked up with those big eyes again, Like that daddy, right?
I pet his head, kissed his nose and told him what a good boy he was.

When we were hurt or sick, he would lie next to me and not leave.  Same as when we worked in our office….just lay there content to be with us.  He could play catch, he could run.  Oh how he loved to play catch with one of about 15 balls he would fetch out of his ‘toybox’.  And if he chose one to play with, it was THAT ONE ONLY that would do.  Too smart.   Once when Jessie got out of the house, we could not find her anywhere.  In desperation my daughter took Dusty out on the porch and with a desperation in her voice she said, Dusty, find Jessie….go find Jessie, Dusty.   He put his nose up in the air as if he was smelling, then immediately ran down the steps and a half a block away and stopped and stared at a neighbor’s house.  We were astounded.  Jessie was found in their back yard.  And whatever he was to me, he was ten times more to Jill.  He was smart as a whip and as protective as a bear, this little cow of a dog.

On Sunday last, at around 3 pm he started breathing funny, by 5:30 my Little Cow was gone.  The Vet said, in actuality, he died of natural causes even though by all expectations and written materials he had another 6+ years left.  But that was not to be.   Amazing the things we can become attached to and we are rewarded greatly with mountains of unconditional love and kisses and all we need to do is just give them a little love.  As he was fading in and out and leaving us, I kissed his little nose one last time and whispered, That is the kiss you once gave me……I hope mine now takes you home.

Sleep my Little Cow, We will always love Dusty.