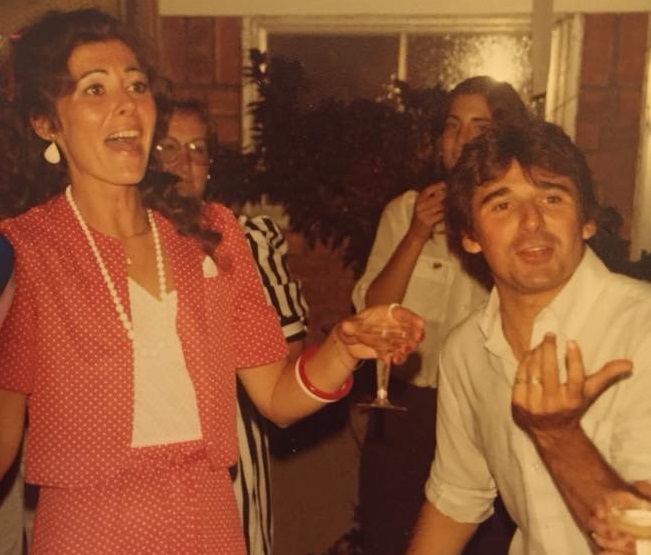 My sister passed away this week, she was seventy-one (the picture above is how I will always remember her). She was the oldest of six kids and I, the youngest, but only seven-and-a-half years separated us. When a baby, she would feed me and marveled as I skillfully added bread, spaghetti, and meatballs into my milk only to drink it (sorry, yeech). She was my Santa Clause and I, her Little Elf (later she would call me L.E. as not to embarrass me). Now at age 63 it made my day when we would speak on the phone and before hanging up I would say, “I love you”, to which she would reply “I love you more L.E”, every time. Under most definitions, we are all a close-knit family. JoAnne was a mom to six kids of her own and grandmother to thirteen. My sister was not perfect and for the rest of this story, kindly recognize this fact we all know to be true. Let me also say that I cannot begin to thank the so many people who reached out to our entire family since we shared this news, it is so greatly appreciated.

My sister, passed away suddenly.

Why this is an odd statement to say is because for at least the last third of her life, my sister was paralyzed completely below her neck, a victim of multiple sclerosis, commonly called MS. She had many ups and downs, but always came through. Even when admitted to the hospital, coming back out was usually not that far away. This most recent stay in the hospital would be different and a decline started, would quickly get worse. As she was being prepared for some scans, she passed away as they got the equipment ready. My niece, Meaghan her daughter, was with her and in this world of COVID, not dying alone is a welcomed gift. The final end would be listed as cardiac-arrest, in essence, JoAnne’s earthly body had just had enough.

In the story from the bible of Job (pronounced Joe-b), Job is tested beyond human comprehension; death of loved ones, pain inflicted, disease inflicted, problems, trouble, and more. And yet, Job remains faithful to God and never once complained. If ever there was a modern day story of Job, my sister would be cast in the lead.

MS comes in so many degrees of severity and as JoAnne stated to me once more factually than complaining, “THIS is the lottery I win”; to be given the worst form of MS. You see my sister never, not once, ever complained of her situation. Many, many people she dealt with, turned their backs on her, both personally and professionally and they will now live with that burden. Because she proved naysayers wrong, time and time again.

Living by herself, service providers who said she could never live outside a facility alone were proved wrong as she was granted her independence and lived in her apartment, with her trusted service cat, Selene. A black cat with such a heart and positive force that one would swear she alone would break the stigma of black cats every. Caretakers would come and go but never once would JoAnne grant the permission to give up her independence. Her son, a wiz on anything that runs through the walls of a building, created practically everything to be voice activated because JoAnne’s mind and voice, despite a completely compromised body, remained sharp as a tack.

Traveling by plane, attending family events, attending milestones in both her own children’s lives and her nieces’ and nephews’ lives, seeing her beloved Barry Manilow in concert, meeting her idol “C.C.” Sabathia on the field of Yankees Stadium; JoAnne was going to let MS stop her from nothing……that attitude would guide her life. When my mom and dad passed it was not even a thought that she wouldn’t, or couldn’t attend their funerals. As the services ended at the cemetery, the order to wheel her closer was given, and she would pay her respects and thank them for all they meant to her. “God gave me the strength and mom and dad showed me how to use it”.

Many medical professionals would offer a course of action, and if she disagreed, she would fight them until one was convinced on the correct course to undertake, many times, hers. “I know this disease and I know my body”. Many family members would advocate on her behalf, and most times, it was the right path to take. I have many stories how people tried to take advantage of her, her position in life, her needs, her position, and those stories would be accompanied on how they were dismissed, each and every time. But on those whose actions could have, and might have, devastated those not as strong; JoAnne refused to say one thing negative. Not most times. Every time. She would defer the comment and say something positive about the person without fail. She would also remind all how God knew what he was doing, and so many had it worse than she. Being negative was not allowed and ‘no’ was nothing more than a word.

Her children wrote such beautiful stories as they remembered their mom this week. Each one emphasizing just how strong she was and how, each one, had a specific trait/attribute in their life they now hold due to their mom, well, being their mom.

She always and in all ways took a huge interest in her Goddaughter’s type 1 diabetes. When we spoke she wanted to know the latest and greatest in research for my two kids as well as trying always to hear about the advancement of science discoveries. Her MS and T1D being autoimmune diseases, she would share that helping medical research in one disease would surely help the other. “Autoimmune is autoimmune. Although different in their autoimmune properties, there are parallels, and there is cross over”. And of course, she was 100% correct.

Recently, she would be taken to SUNY Stony Brook Hospital one last time. And as I spoke to her daughter this week she informed me that mom was not leaving Stony Brook as she had donated her body to the worldwide education facility known for research with instructions to study her, study her MS, learn from what she lived with, lived with indeed, and use it to help others with MS and beyond.

So my sister’s last act on this earth was a gift so huge, herself. Organ donations are so needed and to actually say ‘here, take me, and use me’ is one huge final gift of love. Not surprising coming from one who lived her life the same way………a gift of love. Thank you Santa Clause, I will love you more forever. Love your L.E.
I am a DiabetesDad

0 thoughts on “Even in Death, One Finale Gift of Love”