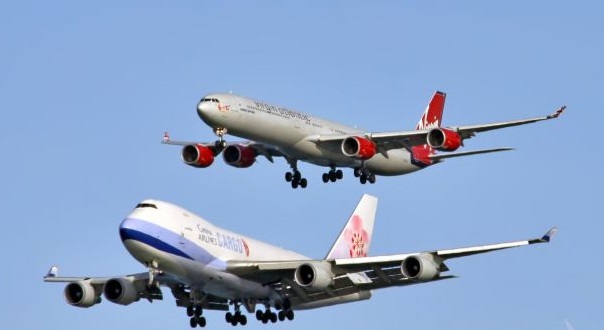 Landing at San Francisco airport, it was a fearful realization for me to watch two planes come in for a landing at the same time (as in the picture which was taken at the same airport).  It seems that they are too close together to even land safely.  There is much trust between these two pilots; so close.  Being in one of them is a tad uneasy watching them slowly descend on the approaching runway, well I find that as cool as I do fear.  I felt the same thing this week as I went down the escalator into the exhibition hall of the 79th Scientific Sessions of the American Diabetes Association (ADA) in San Francisco.

Two escalators full of people side-by-side, going down two stories right to the entrance of the runway entrance to the hall.  Trusting in the landing.  Finding out what is new, what is exciting, and what is happening around the world of diabetes is also so rewarding.  The ADA, true to form, gave opportunity for sharing, learning, and even allowing some healthy debating for the benefit of all those in our diabetes world.  An exciting flight all around I would say.

One of the most interesting bits of information, I found, was subtle but it was there none-the-less.  It seems that whoever the ‘powers-that-be’ represent, they have declared the artificial pancreas is now officially dead and closed loop, and/or automated insulin delivery, is now the preferred term.  Far be it for me to say anything but I hated the phrase artificial pancreas from the get-go and wrote about it two years ago. (Click link)
Well it seems the world now agrees.

I found it also interesting to find out at the conference that Medtronic has entered into a relationship with nonprofit TidePool, because Medtronic was supposedly the ones with an artificial pancreas. Will it be that the Medtronic 670g will slowly descend from their highly anticipated expectations. Which leads to another interesting phenomena and that is this idea of mixing and matching pumps, cgms, insulins, pens and any other devices.  More and more DYIers (Do it Yourself-ers) are utilizing devices, blue tooth, the cloud, and one young man has a start-up company utilizing devices such as Alexis, your lap top, your watch, and even the lights in your home to help you monitor glucose control.  Better Living Technologies (betterlivingtech.net) was founded by a father of a child with type one.

Gizmos, bells, whistles, and so much more to try to ease the burden of living with this disease.  At the end of the day, it will be up to each individual to figure out what will work for them.  But remember always, and be warned……..I remember distinctly that when the ‘artificial pancreas’ came out it was touted as the closest thing to a cure that there ever was…..it’s not, and it wasn’t.

Me? I still want a biological cure……….Me? I still think we will get there.  It does not surprise me that a father of a child with t1d would invent a way to connect your watch with Alexis to control your lights to warn you of low/high blood sugars.  It does not surprise me that many advancements of late, or in process, have someone with diabetes or a loved one with diabetes involved. Maybe, more and more, these same people should be more involved with the research labs for a cure.

As I packed my bags to leave ADA, my head was in a tailspin on the amount I learned and the amount that is occurring in our diabetes world.  Thank you ADA.  Always exciting to be flying so high and coming in for a landing with trusted folks……right on the runway next to us.
I’m a DiabetesDad
Please visit my Diabetes Dad FB Page and hit ‘like’.