The Diabetes Disaster Response Coalition was created after years and years of people wanting to do something, AND DOING SOMETHING, but without a cohesive effort so the entire diabetes community knows what to do in the time of disaster.  This is the only time I will speak in general terms about this group…..moving forward, when you see the logo, it will be an indication that there is an update as this column will be turned over for information about a particular disaster.

During times when you want to help, go to the Diabetes Disaster Response Coalition FB page for up to the minute information on how to help.  There is a great body of people involved on this Coalition co-chaired by Carol Atkinson (Insulin for Life/USA) and Kelly Mueller (American Diabetes Association) because that makes sense.  There is a lot of things making sense with this group.  At some point I will fill you in on who is involved but let’s get right to the nitty-gritty with information on what to pass along to your family and friends in Hawaii who might have diabetes concerns.

The most important information is what YOU NEED to do to be prepared to handle your (or a loved one’s) diabetes care during the upcoming storm:
CLICK THIS LINK FOR PATIENT PREPAREDNESS

1. Documentation. Write down type of diabetes you have, other medical conditions, allergies, and previous surgeries. Include current medications, doses, and time you take them along with your pharmacy name, address and phone number.

* Prescriptions. Ask for an extra supply of all medications, including insulin and Glucagon, if prescribed. During an emergency, you are eligible for an emergency override. Call your pharmacy, if they say no, contact your healthcare provider for an altered prescription. Warning: Insurance may not pay for the increased amounts.

2. Insulin. If you lose power and you have unused insulin, don’t throw it out! In an emergency, it is okay to use expired or non-refrigerated insulin. 3. Shelters. A live map of open shelters from the American Red Cross can be found here. You can also contact the American Red Cross directly at 1-800-RED-CROSS. If you find yourself in a shelter without proper diabetes care and supplies, call 1-800-DIABETES.

The Diabetes Disaster Response Coalition FB will be updated as needed.
I am a diabetes dad.
Please visit my Diabetes Dad FB Page and hit ‘like’. 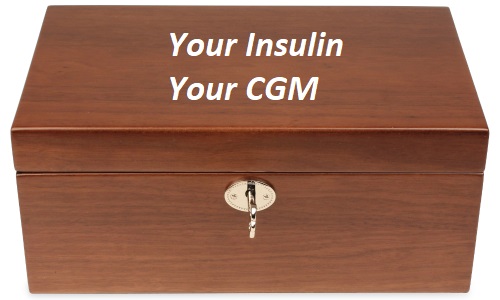 I’m sure there was a time when people were dealing with their diabetes; and were used to peeing in a cup, boiling water, dropping in tablets to match a color chart, and check the color of urine to see how much insulin was needed, they were content with the procedure because it was really the only choice. You did it this way because that is the way it was.  And along came a study that showed close control of blood sugars could help enhance the life style of those with diabetes and even prolong lives.

Well the pharmaceutical business EXPLODED with devices and treatments never seen before in our diabetes world.  What was a 30 minute process, minimum, was now being done in 30 seconds…….but there was a catch.  The individual needed to harpoon themselves 4-8 times daily to produce a drop of blood used to measure the glucose when applied to a strip attached to a meter.  That was the tradeoff.  It was better and faster but to the individual, was it ‘better’ to stab oneself in the exchange of faster and more accuracy?  That is the way it was.

You see if you have been around in this diabetes world twenty years or less, you really do not know anything else but glucometers as THE DEVICE to use.  You became used to ‘harpooning’ yourself because that was the way of the world and you were taught nothing different.

An all-out war broke out in the pharmaceutical world to be the fastest meter, the most compact meter, and the most accurate meter.  And work began to improve upon ‘the norm’; to make it so no blood drop was even needed.   A way or a means to check one’s glucose constantly and on a device where the information was sent electronically, constantly……..like predecessor management tools, it seemed like a dream come true.   But it happened and the continuous glucose monitor (CGM) is now a part of our every day life……..for some.

“I do not want to wear something all of the time?”
“I’d rather do it the old-fashioned way with a meter.”
“Being attached does not seem right to me.”
And if you did not always use a CGM……that is your call.

But we bought up a generation of kids who knew nothing else when it came to harpooning themselves to obtain that drop of blood…..it almost seems archaic, doesn’t it?  But they surely accepted it as ‘the norm’.  It’s time to bring up a new generation of kids.  Kids who know nothing else but wearing a CGM………because it makes sense.   The glucometers are becoming less and less and more people are on a CGM than ever before.  Sure we need glucometers, but now they are mostly a back up.

It makes sense that there is something that can alarm when you are low and warn you.  It makes sense to have a management tool almost the time you are diagnosed that can help prevent those swings from low to high and back low again that leaves the person with diabetes feeling like that they are in a spiral in all sorts of directions.  It makes sense to wear something that checks one’s blood sugar constantly.   I’m sure when the choice was to pee in a cup instead of harpooning yourself, it seemed likely to stay with the old way, it was easier………but we now know it was NOT better.  Was it?

It’s time to once again challenge ourselves with something better and not necessarily easier. A CGM should be given as soon as a diagnosis occurs.  We need to ask those questions once again?  From the moment one is diagnosed.

What do you think?