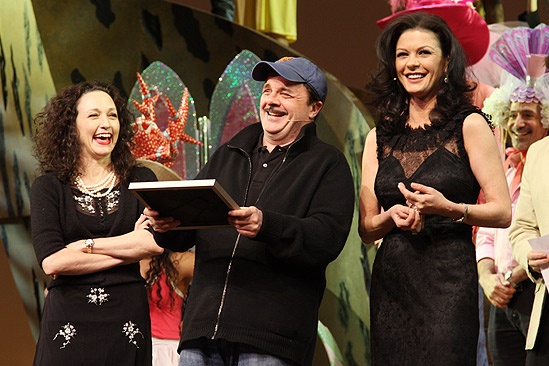 So every year about this time, my heart goes deeply back to my roots of the NY Theatre scene.  For it was the NY Theatre scene that, in essence, readied me for a career I am now in, fund-raising.  True, I wear a few hats, but at the end of the day fund-raising for the Diabetes Research Institute, to help find a cure for my two kids and the millions like them fighting diabetes is my end game.  My Goal.  My Passion.

But back when, living in a care-free world, my life was the Theatre.  My family was very young and there was no diabetes.  Nancy Cassaro, one of the creators and stars of the New York smash hit, Tony ‘n Tina’s Wedding, came to me and said we have been invited to partake in the Broadway Cares Equity Fights Aids Easter Bonnet Production.  Back then, the event was in its infancy.  But it was a good, no….a great, idea.

Broadway shows competing with skits, an Easter Bonnet, and fund-raising to help those battling aids.  I knew quite a few people who lost this battle and those who live with it, still.  So being involved way back when was a passion but with a huge amount of work and great fun.  And there have always been pretty big names involved in this event over the years.  Pictured are Babe Neuwirth, Nathan Lane, and Catherine Zeta-Jones from the 2010 event.

For six weeks, shows in New York and on tour raise money with everything from signed posters, meet-and-greets with the cast (including some big names), signed memorabilia, live on-stage auctions, and of course the ever-famous bucket collections at the end of each show.  In the short time since its inception, The Easter Bonnet Competition has raised over 87 million dollars with their efforts.

So way back when, again, Nancy asked me to come up with fund-raising ideas.  And working with the cast, we came up with some really fun ideas.  In the genre of our show (a wedding, but not really) we created a telethon, but not a real one.  Right after our show was over on Sunday, we changed our space into the telethon TV studio.  So much detail right down to a phone bank with phones ringing on a recorded loop so all through the night phones were heard ringing.

We created hours and hours of entertainment, including a TV camera for ‘broadcast’; and all-night long people paid to come in and watch whatever it was we were doing—-even in the wee hours.  It was crazy, it was original, it was exhausting and it was one of the most rewarding nights of my life.  This was our big fund-raiser and we also did bucket collections after each night of our actual show.  When it was time for the big Easter Bonnet competition—ours of course was a huge wedding cake-bonnet, being onstage with all famous Broadway folk, well it was cloud nine.

So it has been 30 years since we did that, and I was a mere 31 years of age.  The Broadway community continues their efforts and now of course, they raise millions each year and this year (today in fact) alone was over 6.5 million dollars compared to the couple hundred thousand raised, when we did it.  This year, my dear friend Billy was director, a writer, and a designer of one of the bonnets.

So many times we hear people trying to come up with new ideas to raise money for causes.  It’s just so impossible, right.  But yet, years ago, our little show was up against all the Broadway mega shows like Les Miz, Cats, Phantom and many more.  But we had a good idea and good people coming together for a cause we believed in and when the money was counted that year, Tony ‘n Tina’s Wedding was one of top fundraising shows of the Easter Bonnet Competition.

A few days after the event, we were back at the theatre, or ‘ the space’ as we called it,  and Nancy came in and she gave me a package.  She said, “you deserve this”.

Puzzled, I opened the package and it was the award they gave her for our fundraising efforts.  I was humbled but so proud and the feeling was just incredible.  I will never forget that feeling.

Years later, I would enter the fundraising world.  Kaitlyn would be diagnosed with t1d and my energy would go toward finding a cure.  I dream about that day.  I do believe with all my heart that we will get there.  And that award would be a million times more than what I felt when I first received that Easter Bonnet Competition Award…….but my next award will be a cure.  No award, no frame, no trophy……..just a cure.
And the curtain will close on diabetes.
I’m a DiabetesDad
Please visit my Diabetes Dad FB Page and hit ‘like’.

I have written a million times to just “Not do Nothing’ in the diabetes world; in life.  There is a news story circulating about a 9-1-1 operator from California who bought the people of Newtown, CT. a free cup of coffee.  Google the story–it is now everywhere.

Tom Cavanaugh called the general store in Newtown and ordered 100 cups of coffee.  He couldn’t be there in person but remembered his mother’s teaching that when someone grieves, you send prayers and you send food.

Tom is from New Jersey and now lives in California.  We met when we both were acting in Tony ‘n Tina’s wedding a lifetime ago.  Tom is a big guy who has a heart that surpasses anything else.  His actions, actually, did not surprise me.  If someone needed a ride, a couple of bucks, or help; Tommy Cavanaugh would be at the front of the line saying, “what do you need?”

His one-act of compassion, this one-act of buying coffee, has started many, many more acts of kindness in this small town in Connecticut, and around the world; all inspired by Tom’s actions.  Imagine if we all did the same thing as my friend from California–the world might just change….and there would be nothing wrong with that; would there?

Nice job friend, you changed the world……now it’s up to us to continue……what will you do?

I am a diabetesdad.